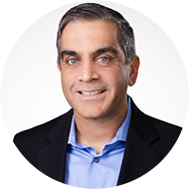 Vinay is an Internet executive with over 20 years of experience, including general management of start-up organizations, strategic partnerships at Google, product development, and business operations. Prior to Mytonomy, Vinay was a strategic partnerships executive at Google for seven years, working on the critical toolbar distribution initiative where he negotiated the (original) agreements with Sun Microsystems to bundle Google clients with Java, and with Adobe Systems to bundle Google clients with Flash, Shockwave, and Reader. These two channels helped the toolbar and eventually, Google Chrome, get massive 3rd party distribution while growing search market share.

He was also a founding team member of the Google TV Ads business where he established the foundational relationship with the EchoStar, bringing second-by-second STB measurement to TV advertising. He is the recipient of two EMG Awards for his contributions at Google.

A native of Rochester, Vinay started his career as a software engineer at Eastman Kodak where he developed various features for the PictureMaker Kiosk. He is the co-inventor of multiple patents throughout his career.

Vinay has degrees in electrical engineering from Purdue University and an MBA from MIT’s Sloan School of Management. He is married with two children and lives in the Washington, DC area.

Learn about how Mytonomy can support your organization.

Mytonomy helps healthcare organizations give patients what they need to care for themselves – in the palm of their hands. Patients are engaged with micro-learning videos orchestrated by a novel clinical CRM.